The Hanse Rival - Book I

My latest novel, The Hanse Rival, after more than three years of research and writing, and countless drafts, has been published.


From the jacket blurb: 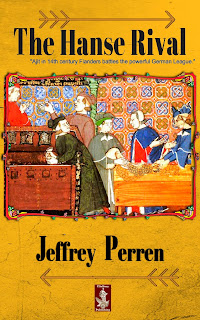 --
["The Hanseatic League was a commercial and defensive confederation of merchant guilds and market towns in Northwestern and Central Europe. Growing from a few North German towns in the late 1100s, the league came to dominate Baltic maritime trade for three centuries along the coasts of Northern Europe. Hansa territories stretched from the Baltic to the North Sea and inland during the Late Middle Ages, and diminished slowly after 1450.

Merchant circles established the league to protect the guilds' economic interests and diplomatic privileges in their affiliated cities and countries, as well as along the trade routes which the merchants used. The Hanseatic cities had their own legal system and operated their own armies for mutual protection and aid. Despite this, the organization was not a state, nor could it be called a confederation of city-states; only a very small number of the cities within the league enjoyed autonomy and liberties comparable to those of a free imperial city." Wikipedia]

Posted by Jeffrey Perren at 9:49 AM No comments:

The latest Jeffrey Perren mystery is now available. Adventure, humor, mystery, and a dash of philosophy await the intrepid reader.

Free eBook versions to the first five requests. All I ask in return is a review of at least 100 words (two short paragraphs). 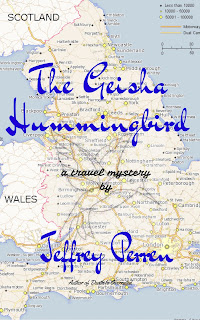 “Magar stood over her suitcase wishing Carl were dead.
An instant later she drew back the wish, knowing it was unkind, even unjust.

She had no reason to hate Carl. The Chairman of Steuben Shipping had done nothing to annoy her except ask her to marry him.”

A proposed marriage of convenience soon turns into the most inconvenient period of this brilliant ship designer’s life when Carl fails to show at the London airport on her arrival.

Has he been kidnapped? Is he in hiding from enemies who want to kill him and take over his business? Is he just marriage shy?

But a delayed wedding instantly becomes the least of her problems as she sets off around the UK to track down the elusive millionaire. And in short order Magar morphs from hunter to the hunted.

Accompanied by ex-college-flame Phillip – who is equal odds either hired assassin or savior – the beautiful marine architect is beset on all sides.

Her trek may cost her an inheritance, even her life. Or, at the very least, her independence as the shadows of her past return to threaten her future.

“Buckle up Jeffrey Perren fans for a travel mystery that races along at superhighway speeds in swingin’ ‘60s England, Scotland, and Wales.”

Posted by Jeffrey Perren at 4:11 PM No comments:

The Hanse - Another Research Tidbit

Another item from my research on the new novel about the Hanseatic League:

"If a citizen gives his daughter or niece in marriage to a man [from another city], and another man comes and says that she is his lawful wife, but cannot prove it, he shall be beheaded."


Ouch. Now, that is over the line, surely.
Posted by Jeffrey Perren at 3:15 PM No comments:

The Hanse - A Tidbit of Research

In happily researching my new novel, revolving around the Hanseatic League - merchants of North Germany in the 13th-15th centuries - I came across this interesting item.


Among the many things agreed to by adopting the 'law of Lübeck', as part of joining the Hanseatic League, we find this:
"If any man marries a woman in one city, and another woman from some other city comes and proves that he is her lawful husband, he shall be beheaded." Tough, but fair, I'd say....
Posted by Jeffrey Perren at 2:18 PM No comments:

Tellen Song, or the education of Wilhelm Tell, released Christmas, 2015.

Publishing the story of the William Tell — part legend, part history — was something of a Christmas gift to myself.

I happened across an article some years ago that tried valiantly to outline how much was myth and how much true story. An heroic attempt but one that didn’t succeed entirely, nor do I think the author thought he would. Too much is lost in the mists of time. It has been over 700 years after all.

Yes, the Battle of Morgarten, one of the precipitating events to the founding of Switzerland, occurred in November, 1315 AD. That’s certainly a verifiable event. (Though, even here there is some controversy among historians.) And yet, there is so much that is ill-known about how the country we now call Switzerland came to be.

That shouldn’t be surprising. It was a very long time ago, and in an area where written records were not the norm. But there are other reasons, some of which are possibly of interest to an English-reading audience, most of whom pay little attention to Switzerland (like most of the world).

One major factor in that uncertainty is the sheer complexity of German politics of the period. The late 13th-early 14th centuries were a time of an array of mind-boggling competition among power-lusting individuals, families, and factions.

That extended from north, east, and west of what is now Switzerland down to Lombardy (northern Italy) and beyond. The rulers of the badly-named Holy Roman Empire had been messing about not only in central and south Europe for generations but all throughout Italy, too.

You’d think the Alpine mountain ranges would’ve cut them off at the pass, but the St. Gotthard and others helped open up Italy not only to trade but to the usual rapine from men who want want others have produced.

And that brings us back to Tellen Song, which covers a great deal of this history, grasping and factional fighting, and a fair amount of more personal events — both real and invented.

Give it a few minutes exploration, please. Read the blurb. Download and read the sample. Let me know what you think — good, bad, or otherwise. 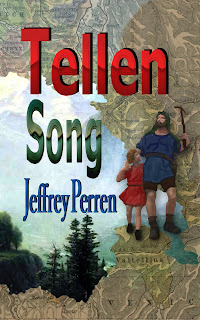 “Jeffrey Perren’s skills as a wordsmith are high caliber.

“He seems as if he would be comfortable on an archeological dig. He also knows his medieval Irish history and a good bit of the politics of the early church.”
Linda's Reading Lounge
—

“This book is an excellent and engrossing historical tale.

Seamlessly told through the eyes of those in the 9th century and modern day, it was a real pleasure to read.

The style of writing really grabbed me from the first few pages to the end.”
Ali, A Woman’s Wisdom 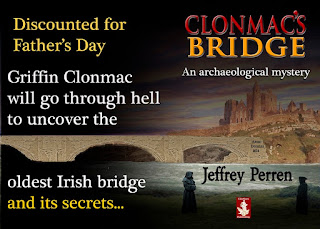 Posted by Jeffrey Perren at 7:29 AM No comments:

In honor of the 200th anniversary of the Battle of Paris, fought March 30-31, 1814, ClioStory Publishing is sponsoring a giveaway of Jeffrey Perren’s “Cossacks In Paris.”

The giveaway for a free, autographed copy of Cossacks In Paris, runs from March 30, 2014 to April 20, 2014. The Battle of Paris began on March 30, 1814 and, after abdicating, Napoleon left France for exile on the island of Elba on April 20th. It would be more than nine months before his return, which began the 100 days leading up to his final defeat at the famed Battle of Waterloo.

“Rebellious engineer Breutier Armande is drafted into Napoleon’s Grande Armeé on the eve of the 1812 Russian campaign. On a spying mission to St. Petersburg he meets Kaarina, daughter of the counselor to Tsar Alexander I.

The pair soon fall in love — but Kaarina is betrothed to Agripin, a brooding Cossack and a favorite of the Tsar. When she refuses him, Agripin kidnaps her, sowing a showdown to the death between the two young men.

Risking a firing squad, Breutier deserts Napoleon's army during the war. Dodging the vengeance of the world's most powerful rulers catapults him onto a perilous quest to hunt down his greatest enemy.” 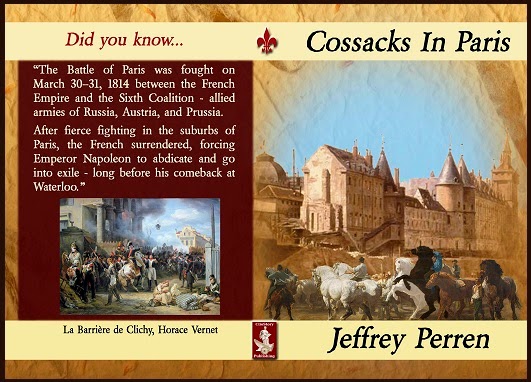 Jeffrey Perren
Fort Worth, Texas, United States
Jeffrey Perren is the author of "The Hanse Rival, and other novels from ClioStory Publishing.